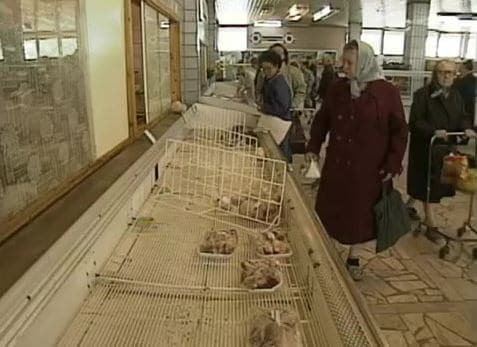 The case of the stolen scallions

Most stories begin in childhood. This one is no different. I was about nine when it happened: A flock of adult women – mothers, aunts, and grandmothers, descended upon me and took away my scallions.

Perhaps I should explain.

The year was 1985. The place was Moscow. At that time, Moscow was not in Russia, as it is right now. It was in the USSR. The economy was socialism, which perhaps you remember, meant long store lines and empty store shelves.

It was not all bad. There was a certain degree of freedom within the confines. For example, ever since I was seven years old, I was allowed to take the bus by myself. I did not go far, just a stop or two to the local store and back.

It was the end of summer, the harvest season, which meant that the stores could possibly, potentially carry fresh fruits and vegetables. I went to see what they had in stock that day. As I was perusing the empty isles, an employee wheeled out a rack full of scallions. They were arranged in bunches about one inch thick, each bunch was placed inside of a paper bag. There were maybe 30 bags and they filled up the display completely.

To my surprise and joy, the employee placed the rack right in from of me. Immediately, with my side vision I saw fifteen to twenty women running in my direction. I knew that they wanted the scallions too and I knew that I was the lucky one. I was already there.

I reached in, grabbed a bag and then… I found myself empty handed. I reached in again. I felt my hands touch the bag, I saw the bag move toward me and then again… my hands were empty. This happened two or three times more.  The whole experience took twenty seconds maximum. And then, it was over.

The scallion rack was empty, the women were gone and I was there alone, empty handed and confused.

I think I bought a loaf of bread that day.

Later in the evening I shared this story with my parents. I thought they would tell me to hold on to the bag harder next time, or to use my elbows. But instead they became quite indignant about that fact that adult women had such miserable lives that they would stoop so far down as to steal scallions from a child. Even worse, considering the fact that most likely they did not even see a little girl, next to the rack, reaching in for a bag.

Thirteen years had passed. The Berlin wall came down, the USSR dissolved, I moved to the USA. Empty store shelves had become a memory.

It was the end of December, holiday time, which meant that the stores would most likely have items on sale. I went to Macy’s to get a present for my boyfriend. Suddenly, I found myself in front of a sale rack full of cashmere sweaters. I reached in, grabbed a sweater and then… again, to my great horror, I found myself empty handed. Out the corner of my eye I saw a woman walk away with that sweater. I reached for another one, the same thing happened. Another woman literally grabbed the sweater from my hands. I turned around and left.

In my car, as I was replaying the incident in my head, I became shocked at how frazzled, stressed, and unaware women had become during this holiday season. I mused about how stressful one’s life has to become to put her in a situation where she inadvertently steals a sweater… meant to be a gift… from a young woman’s hands… in a country that has everything… year-round…

They can also be loving, kind and giving.

Because neither misery nor happiness depends on the external world.

The question is, how do we apply this knowledge in practice?

And this is not something I can answer in one short blog.

Happy Holidays, everyone. I hope you have a joyous and peaceful holiday season, no matter where you are, what you are doing and who are doing it with.